Thanksgiving was an absolute success, of which I am still basking in the glow. I am munching on and sipping leftovers as I type this. Be that as it may, today I had to see my girlfriend off back to the United States. I’ve been a bit morose, to say the least.

One bright spot was stopping in at a Giraffe for the first time.

When I went to see “The Killing of a Sacred Deer,” my cinema was right across from a Giraffe. Its eclectic decor and vibrant menu intrigued me, so I told myself I’d investigate later.

We love this beautiful snap of our vegetarian Spicy Rice Bowl, taken by @thelittlelondonfoodie

In Mexican Spanish, the word 'taco' means 'light lunch'. Well, if you insist…

Later was today. After checking in, Genna and I made a beeline to Departures (low-key on the prowl for food). We came to a crossroads between Giraffe and Caffè Nero. I have sung the praises of Nero’s gingerbread hot chocolate for some weeks now. But I knew that a cheese toastie wouldn’t be enough and that we’d best opt for a real restaurant with “real food.”

Genna and I both ordered Giraffe’s breakfast special. Mine was vegetarian, which meant avocados and portobello mushrooms instead of bacon and sausage. 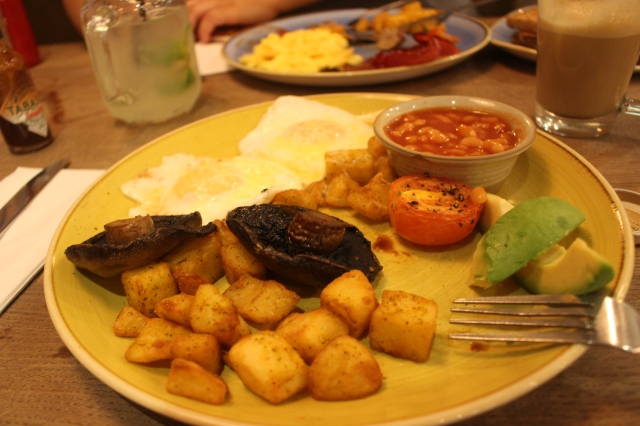 I want to bring attention to the baked beans. Sure, Giraffe is hip and cool, but it kept its breakfast it close to the book.

No matter where you are in the U.K., there is a good chance that your full breakfast will also comprise baked beans.

As an American, the thought of eating baked beans on any day other than July 4 repulses me. Especially when I can’t be found eating a hot dog at a cookout as it is, why on Earth would I be eating baked beans? With no good reason to address or occasion to attend?

Besides, adhering to Victorian displays of wealth and upholding British class hegemony is antipathy to my very being.

I took a bite anyway.

It’s not because the baked beans tasted terrible or anything. It was just that, psychologically, I was convinced eating these baked beans were the wrong move. It was breakfast for crying out loud. I couldn’t defile the sacred tradition of breakfast with these syrupy, heathen legumes.

More importantly, I couldn’t betray my country like that. We were fresh from Thanksgiving. How could I call myself a patriot if I’m in England and eating these English baked beans for breakfast, just 24 hours after celebrating the bloom of America’s independence?

Nevertheless, the rest of my betrayal tasted delicious. I stole some of Genna’s toast, and slid my fried egg and avocado on top of it to create a sort of make-shift tartine.

The home fries were seasoned just right (a good balance between salt and spice). Beyond their pure deliciousness, they tasted divine with orange marmalade and chipotle Tabasco sauce.

Yes, I paired the jam with hot sauce. More than saying “y’all” instead of “you lot” or “bathroom” instead of “toilets,” it has got to be the most American act I’ve committed. If betraying the U.S. through baked beans was delicious, then bastardizing the delicacy of jam was-down right exquisite.

All this considered, best believe if I catch myself at that cinema or in the neighbourhood any time soon, I’ll be grubbing at Giraffe once more when I can.